The Transportation Transect shows the reach of transit technologies into the urban footprint. It also points the way towards achieving cities with a zero-carbon footprint.

We can map all the transportation technologies in use today on the rural-to-urban transect defined by Andres Duany using Patrick Gedes‘s Valley Section (1909) as a model.

We see the threat of global warming receding as EVs and the use of alternative energy sources in our cities rise. For the first time in the history of the city the possibility of zero-carbon urbanism is dawning. For the first time in western urbanism we can imagine a city where inputs and outputs are  in balance. However, that balance will be more easily achieved using the human scale urbanism that presents in Transect zones T3 – T5. Approaching a zero-carbon urban footprint as a limit will ultimately net untold benefits for the environment and the general health of the entire population

With the advent of digital technology and the internet the central business districts of the mid-twentieth centuries are no longer necessary. The need to bring together in great numbers a workforce into the city is sunsetting. The various skill sets that drive the modern economy will be increasingly decentralized bringing about the demise of the ‘Central Business District’ or T6 which is shown crossed out. With it, recedes the tower-and-subway urbanism with its hyper-densities, arterials and streets chocking with standing still traffic jams most of the day long. The finer grain of the T4 – T5 zones offers greater flexibility and is better suited to defend against the spiking land values triggered by public and private mega-projects combining on T6 sites.

The remaining T1 to T5 zones in the Transportation Transect can be served by a surface transit technology ‘pyramid’ that runs all-electric and occupies the same amount of road space. This simplification presents new opportunities for urban planning and design. The routes are established at the lowest levels of service with cars and trolleybuses. Transit service levels step up the pyramid to as demand presents. At the three highest levels transit operates between tree medians, separating the service from the traffic stream and offering an enhanced sense of safety for pedestrians using the street.

However, whereas the Transit Pyramid presents different transit technologies in arranged in increasing levels of service, the Transportation Transect compares the reach of these different technologies.

Thus, automobiles traverse the entire transect, while subways are relegated to serving the urban cores (T6). The heavy trains achieve 10x the capacity of a one-Tram service but costs are much higher. Light Rapid Transit serves the (T4 – T6) zones, yet nets savings achieved through lighter construction.

Subways typically serve the most dense and congested districts in urbanism—section T6 in the urban-to-rural Transect. Subways offer the dual advantage of moving massive amounts of people with relative ease without crowding the surface. The principal concerns with subway construction are two: their great expense, and the tendency of these public mega-projects to combine with private mega-projects to lift land prices locally, and then regionally.

For example, the Elizabeth Line (Crossrail) now completing in London is expected to raise nearby property values by 30%. Yet, with trains 200 metres long carrying up to 1,500 passengers, the capacity at 1 minute headways will be 90,000 people per hour travelling in one direction (pphpd). We question the need to bring 1 million more people per day into central London. And ponder if a better approach would have them travelling in the opposite direction.

Trip times on grade-separated service are lengthened by ‘platform access times’. This is the 5 minutes passengers spend accessing and alighting from the subway platforms. Thus, 10-minutes per trip must be added to grade-separated systems. This represents as a time disadvantage when comparing grade-separated and surface systems.

Finally, subways have not proven effective in combating vehicular congestion. North American cities that have mass transit do not appear to achieve mode splits that exceed a 15/85 ratio between transit and private vehicles. Because the service is not on the street, the streets fill up with even more cars.

Light Rapid Transit are railway gauge passenger trains that can travel either grade-separated or in mixed traffic. However, LRT is not as ‘light’ as the name suggests. Among the cost burdens of LRT is the cost of moving underground infrastructure away from the LRT rail bed. Still, the rail gauge affords wider cars delivering a slightly higher passenger capacity than streetcars and buses.

LRT is less expensive to build and operate than subways, thus they typically run on more extensive networks than subways. Yet, they still rely on bus routes to deliver ridership from the suburban fringes. 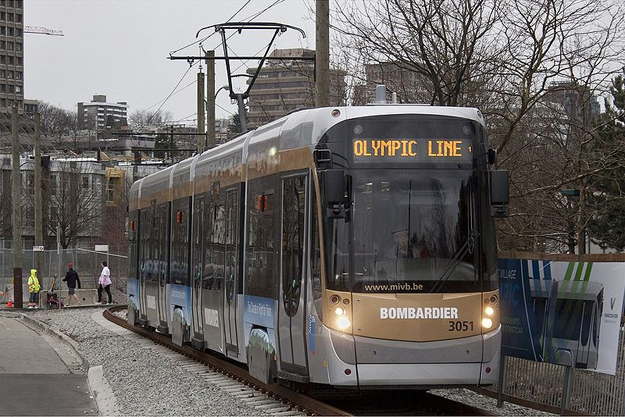 Modern Tram is low-floor rail car traveling either on steel or rubber wheels. While it retains the same gauge as rail and LRT, the cars are typically narrower and carry slightly fewer passengers by comparison. Single tram capacity is 15,000 people in one direction. Assembled into three-car sets the capacity triples. Modern Tram rides in mixed traffic and operates with conventional traffic signals. Adding a café cars allows tram to ride rouge on the railway main trunk.

Modern tram is 10-times cheaper to build than grade-separated systems. Thus, for every 10 km of subway a jurisdiction can build 100 km of modern tram. Yet, passengers ride with the same level of comfort. Operating in the center of the right-of-way separated by tree medians tram or streetcars reduce pedestrian crossing distances by one third. The tree medians enhance the safety of the street functioning as islands of safety; provide space for tram stops to locate, green the street corridor and fine tune the scale of the street adjusting the street aspect ratio to conform with standards for human scale in urbanism.

Moving down one wrung on the Transit Pyramid we arrive at BRT. BRT are articulated trolleybuses operating between treed medians achieving 5-times more capacity than the single buse. The tree medians here also enhance the safety and the experience of the street space. In fact, operating BRT in the center of the street between tree medians anticipates the future deployment of Modern Tram once demand presents on site. Running articulated trolleys as BRT has the added advantage of delivering 0-Green House Gas transportation (0-GHG).

Electric vehicles are expected to cover the full spectrum of the transportation fleet—from  motorcycles and private cars to long-haul trucks—in the not too distant future. The figure of 2,200 pphpd is based on anticipated performance of EVs carrying single occupants. It is hoped that auto-driving features in the EVs will increase the number of cars that can travel safely in a single lane. In fact, on-board computers and anti-crash technologies are expected to greatly reduce vehicle collisions further enhancing road capacity.

The single trolley bus is the vehicle of choice to service low density districts while operating at 0-GHGs.

While one understands the temptation of maximizing revenues, I find the practice of plastering advertising on transit vehicles deplorable. We don’t erect billboards on schools, city halls and public libraries.

Electrified rail is expected to continue to provide the backbone of the transportation network.

One notable reduction in transportation cargo will be the elimination of gasoline as cargo. We are nearer to the day when supertankers will not be at port loading tanker rail cars and trucksk holding tanks at the local gas station.